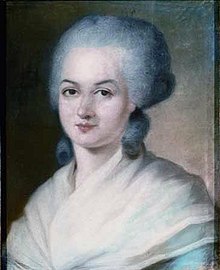 During the French Revolution, there was one lady who took control of all the fighting and all the chaos in the world. She was a woman who fought for the rights of woman, to be equal to men. She wanted peace and she wanted justice. Olympe has been an example for a lot of other women who fought for their own rights all over the world. Because of her braveness, a lot of women have the right to live their own lives in their own good ways.

Olympe de Gouges, a woman who was never rewarded for the amazing acts that she did. She fought for the rights of woman and that costed her head. She is an heroin and she should be honored and remembered! That is why I made this documentary in the year 2012, to honor the greatest feminist that has ever lived till now.